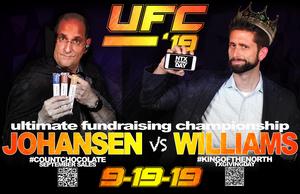 DUNCANVILLE, TX, SEPTEMBER 17, 2019 - A simple challenge that began with the usual lofty platitudes like “for the children” and “a Win-Win”, has turned into UFC’19 - the ULTIMATE FUNDRAISING CHAMPIONSHIP 2019!!!  The humble campus of Village Tech Schools has become an internet sensation with the Chocolate News Network (CNN) and North Texas Network (NTXN) covering the story in hopes of catching a glimpse of two longtime colleagues now turned friendly fundraising foes who are putting the F.U.N. back into “FUNdraising!”


The Challenge is simple: who can raise the most funds for the students at Village Tech Schools, a PK-12 public charter school in southern Dallas County?

To the winner, the glory; to the loser, a chocolate bath with a rice crispy shower.


In one corner - a corner office in the comforts of his air-conditioned palace, no less - is the effervescent King of the North Texas Giving Day. Village Tech’s superintendent and charismatic pontificator of design thinking believes he can raise more in donations on a single day than his competitor can in an entire month. Now, that day is September 19, aka, North Texas Giving Day and it’s kind of a big deal. The Communities Foundation of Texas has turned this day into the largest single day giving event in the nation raising over $48 million for non-profits in North Texas last year.


In the other corner - a corner on a classroom corridor, of course - is the venerable and seasoned Count Chocolate, the school’s grizzled assistant superintendent. With an impressive chocolate sales track record, he will take full advantage of the month of September by plying the community with some of the world’s finest chocolates.


A lighthearted press release was quickly followed up with barbs being exchanged and acts of tomfoolery,

but figuring out whosaidit and whodunit has turned this “friendly challenge” into the village’s favorite past time.


Almost certainly the overly enthusiastic coverage by local media outlets is contributing to the shift in tone of the once “friendly competition.” Facebook posts, viral interviews, and released security-cam footage has this tiny hamlet just south of Dallas captivated by the escalating game of one-upmanship and a no-holds-barred competitiveness between the two friendly adversaries.


With September 19th - North Texas Giving Day, looming just two days away, followers are eager for more shenanigans and to see who ultimately will come out the victor: Count Chocolate or The King of the North Texas Giving Day? But at the end of the day #kidswin, #squidswin at Village Tech Schools.

Exclusive Interview with the King of North Texas Giving Day